Opening dates in 2020 (check in advance due to Covid restrictions): All year including National Heritage Week, 9am-1pm

Stephen and I went to Tankardstown on the way to Monaghan in 2019, where we were staying a night on our drive to Donegal to visit his Mum.

Tankardstown is now a boutique hotel, although the manager Tadhg who showed us around prefers it not to be called a hotel, as it is more like an opulent modernized seventeenth century home. Unfortunately we were not staying the night!

In his Guide to Irish Country Houses (1988) Mark Bence-Jones describes Tankardstown as a two storey late-Georgian house. According to wickipedia, the Georgian period is 1740-1837.

He writes that the entrance front consists of three bays and an end bay breaking forward, as you can see in the photograph above. The entrance doorway has a pediment on consoles, not in line with the window above. [1] There are steps up to the front door.

It has a three bay side elevation, with ground floor windows set in arched recesses with blocking (the use of alternating large and small blocks of stone, or of intermittent large blocks, in a doorcase, window surround or similar feature. Also known as rustication), with blocking around the first floor windows also. Bence-Jones also mentions its parapeted roof (“a low protective wall along the edge of a roof, bridge, or balcony”).

Tankardstown Estate was formed from land confiscated by Oliver Cromwell in the 17th century from Irish or Hiberno-Norman families, principally the Teelings. Teelings were an Anglo-Norman family associated with Meath since the 13th century. In 1686 it formed part of a grant of land to John Osborne. It passed into the hands of the Coddington family in 1710, by marriage, when John Coddington married Frances Osborne, daughter of Captain John Osborne of Drogheda [2].

John Coddington purchased nearby Oldbridge Estate from the Earl of Drogheda in 1729 (Oldbridge is now the Battle of the Boyne museum). It looks as though a nephew of John’s, Dixie Coddington, Sheriff, lived in Tankardstown at some point, perhaps with his wife Catherine de Burgh and seven daughters.

Coincidentally, a brother of Dixie, Henry Coddington of Oldbridge (1728 – 1816) had a daughter, Elizabeth Coddington, who married Edward Winder of Bellview in 1798. This Edward Winder is an ancestor of Stephen’s! So our relatives, by marriage, owned Tankardstown!

The house, as you can see from the photographs, is incredibly opulent with many period features which I assume are original. Above, one can see the unusual black rose patterned wall panels in the inner doorway of the hall, with an arch of alternate black panelling and stuccowork. The drawing room has painted stuccowork on the ceiling and a carved marble fireplace. 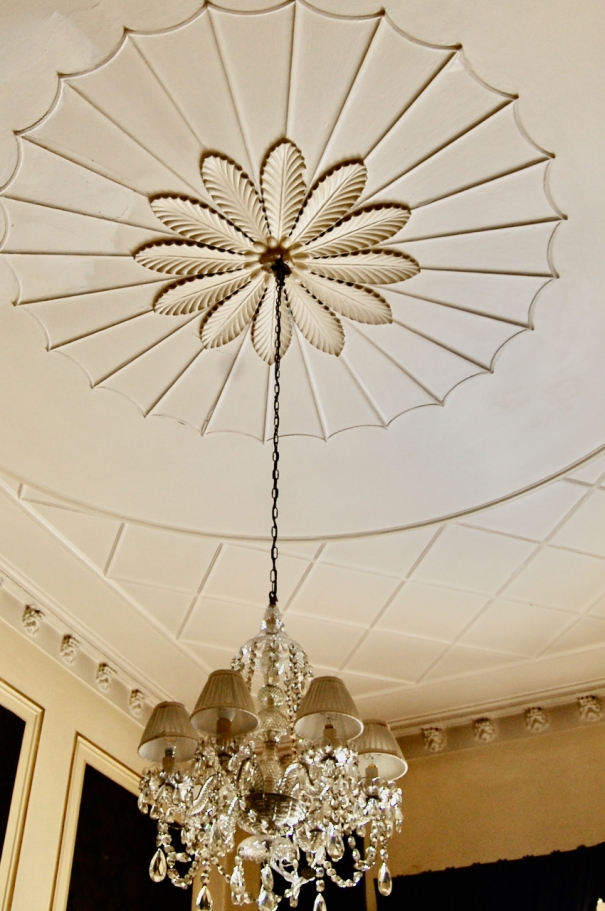 The plush furnishings and decor are so overwhelming that the place that touched me most, in terms of feeling a link with the former residents, feeling the house’s history,  were some worn stone stairs: 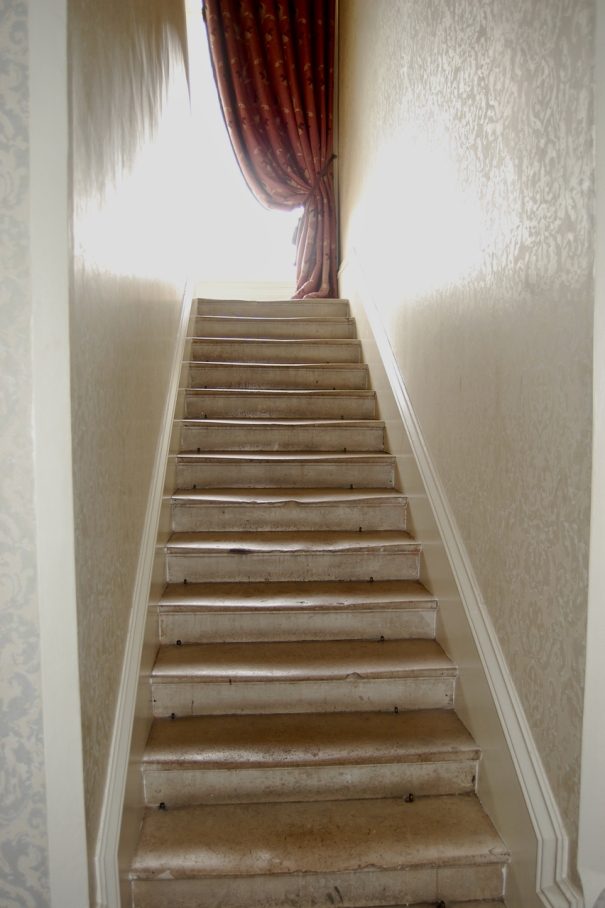 The Coddingtons sold the house to Brabazon Morris. According to Ireland’s Blue Book [5], Brabazon Morris built a neo-Classical villa on the land in 1789, in part on the foundations of a tenth century castle, close to pre-existing stone yards which were built in 1745. The present Tankardstown house must be his neo-Classical villa so the house the Coddingtons inhabited was probably incorporated into this house.

Brabazon Morris mortgaged the house in 1791 until it was bought by Francis Blackburne in 1815, as his country residence.

According to an article in the Irish Independent newspaper by Anthony Smith, Francis Blackburne was born in 1782 and lived to be 84 years old [6]. He married Jane Martley of Ballyfallen, County Meath. [7] He was called to the bar in 1805 and became Attorney General of Ireland in 1831. He was a devout Protestant and Unionist and prosecuted Daniel O’Connell. In 1852 he was appointed Lord Chancellor of Ireland.

With his new position, Francis Blackburne must have felt he needed something more grand, and purchased Rathfarnham Castle in Dublin. However his position as Lord Chancellor ended later the same year. He obtained the position again in 1866 shortly before his death. He gave Tankardstown to his second son, Judge Francis William Blackburne (d. 1921). His older son inherited Rathfarnham Castle.

Judge Francis Blackburne married Olivia Beatrice Louisa Anstruther-Thomson, and had a son Jack and two daughters, Elena and Amable. The Blackburnes carried out extensive additions, refurbishment and redecoration in the 1880s. Jack Blackburne inherited the estate and worked the farm though his first love was racing cars. (see [6])

Judge Blackburne’s daughter Elena married Charles Maurice Waddington Loftus Townshend (called Maurice) (1899-1966) of Castle Townshend, County Cork, in 1928. They moved to Zimbabwe (then Rhodesia) for a while, where two of his brothers as ex-British officers were granted free land, but returned to Ireland when WWII broke out. They lived in Tankardstown after Jack died in the 1940s. They had two children, Francis b. 1930 and Maurice born 1932 [8]. C. Maurice Townshend sounds to have been a little eccentric as he believed he had a sort of second sight – he was able to point to a place on a map where his sister’s missing friend was located. He also pursued the art of water divination. [9]

When Maurice Townsend died in 1966, Judge Blackburne’s other daughter, Amable, moved back to Tankardstown, and she and her sister ran the farm as best they could. Anthony Smith, writer of the Irish Times article, remembers the two elderly ladies giving him treats in the kitchen while his father serviced Jack’s Aston Martin racing car. The article does not mention Elena’s sons but one moved to Australia and the other studied agriculture and farmed in Meath.

Eventually in the 1970s the sisters Elena and Amable sold the house and moved into a smaller house built at the rear entrance to the estate. I am not sure who owned the house directly after the Blackburnes. Both sisters died in 1996. Brian Conroy bought the estate when it came on the market in 2002. [2]

Brian and his wife Patricia spent four years restoring the mansion from complete disrepair. It was to be their dream home.

In the lead up to the Ryder Cup golf tournament which was being held in Ireland that year, a scout contacted Trish and asked if they could rent her property for the duration of the tournament. When the scout visited Tankardstown, she noticed the stable block next to the house and proposed that if it could be refurbished in time, they would rent that out for the tournament as well! The stable block now holds self-contained accommodation.

Tankardstown has a café for lunch and afternoon tea and a dining room, supplied by their own fresh farm produce. 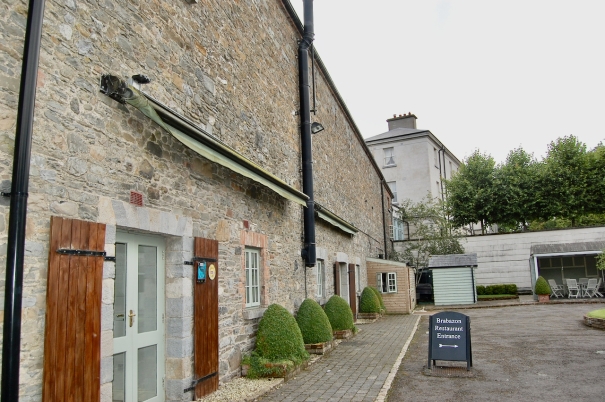 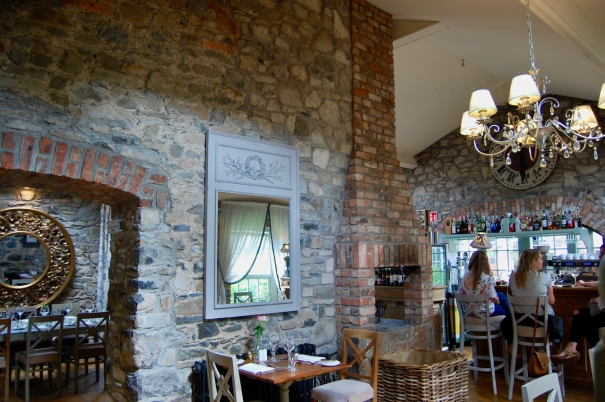 The restaurant, the Brabazon, which was originally the milking parlour, retains the old walls and arches.

It has a large function room, formerly the Orangerie, for weddings and events.

The house is situated on an 80 acre estate with woodland, rolling parkland and walled gardens. There is also a pampering treatment room in a “hide-out” beside the walled garden. 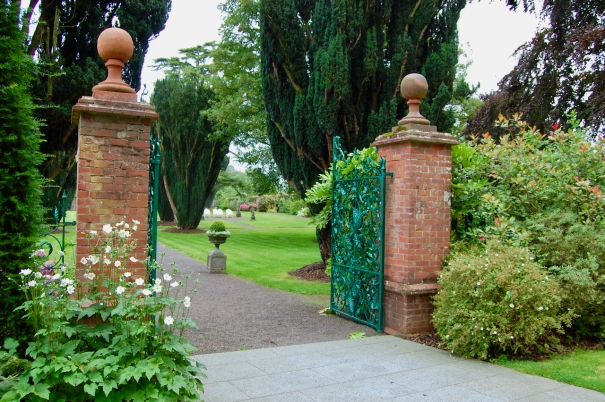 Brian Conroy is an entrepreneur with a successful track record in property development, restoration of heritage buildings and operation of hospitality venues. Having grown up in Monkstown, Co Dublin, he moved to the UK and built an engineering and property business before returning with his family to Tankardstown, Co Meath. He also owns another property on the section 482 register in 2019 which is also now a hotel, Boyne House, Slane (formerly known as Cillghrian Glebe). [10]