On Sunday July 14th Stephen and I went to see Dardistown Castle, in County Meath. I contacted the owners beforehand, Ken and Lizanne Allen, 086 277 4271. 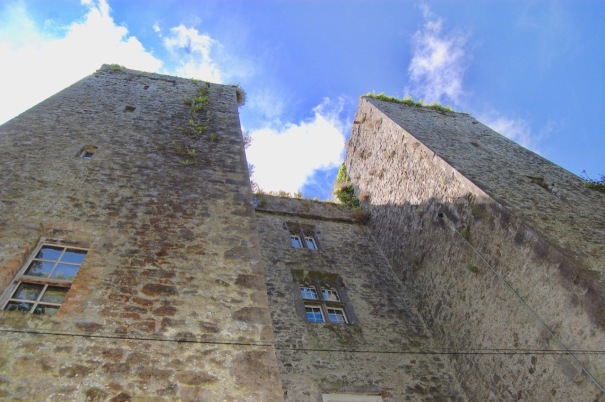 It has some links to our most recent visit, to Dunsany Castle, as it was enlarged by Dame Jenet Sarsfield, who was the widow of Robert Plunkett, the 5thBaron of Dunsany.

She is worth writing about, but first let me backtrack.

During the Hundred Years War, 1337-1453 (that’s more than one hundred!), in which the English fought the French for the right to rule France, the English military were mostly withdrawn from Ireland. To compensate for their military absence, a limited number of government grants of £10 each were made available to landowners in the “The Pale” for the building of fortified houses. John Cornwalsh (or Thomas? Drogheda Museum blog writes that it was built by Thomas Cornwalsh, and that Thomas Cornwalsh was related to the Talbot family of Malahide Castle by marriage, which explains how the castle came into the Talbot family later [1]) obtained a £10 grant in 1465 for the building of Dardistown Castle. According to wikipedia, John Cornwalsh was Chief Baron of the Irish Exchequer.

Driving up the driveway, one cannot see the tower. We drove up in front of the house, which has a lovely square trellis outside. 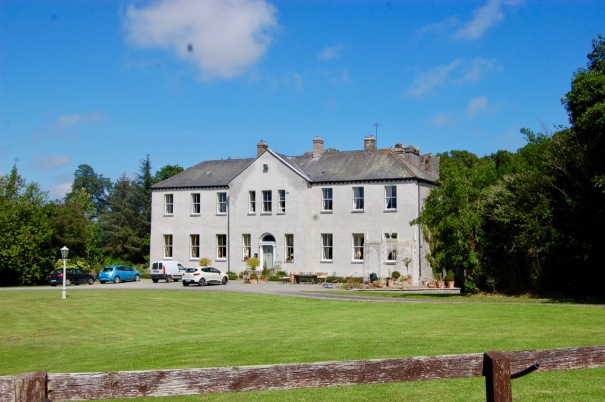 Ken was sitting outside waiting for visitors. He took us around to the back of the house. We went around the side, and only then saw the impressive tower. 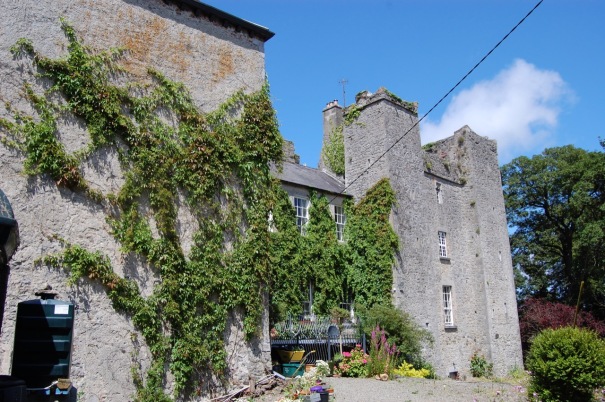 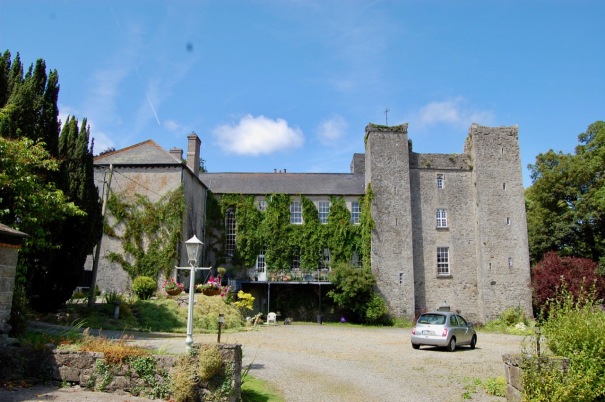 It’s a four storey medieval tower, extended with the addition of a Victorian frontage. The tower is square with sides about 44 feet long and a square turrret at each corner. The turrets are of different sizes.  The main arched entrance to the tower is now blocked and the main entrance is now on the south side. The tower is fifty feet high.

Ken led us in to the ground floor, which was originally the basement. This room is quite empty, and has been used for parties and gatherings so has a bar installed. It is described on the website as a games room. It is surprisingly large – this is by far the largest most spacious tower I have seen. There are vaulted smaller rooms in three of the four turrets off the main ground floor room. One turret would have been the toilet, where everything dropped down to the ground. There is a fireplace in the west wall of each main room on every level.

This room has the remains of a very unusual looking ceiling, “barrel vaulted.” [2] We can still see the sticks, in what looks like a wattle and daub type construction. I had never seen anything like it in a tower, but it is part of the original tower! The website states:

“Following a native Irish technique, woven wicker mats resting on timber beams were used to support the vaults during their construction and at Dardistown bits of the wickerwork may still be seen embedded in the undersides of the vaults.”

We went up the original stone staircase in the southwest turret, unusual because it spirals to the left, or anticlockwise, rather than the right – Stephen is fascinated how the direction in most towers was determined to give the advantage to the owner, so that on descent, he (it was usually a male, I presume, wielding the sword, although surely not always!) could more easily wield his sword than an intruding coming up the stairs. Perhaps the person who designed these stairs was left-handed, Stephen speculated.

The rooms above are furnished beautifully, in a style to fit the medieval origins but with all the comforts of a modern home. They have wooden ceilings. It is tasteful and elegant and I would love to stay there! The Allens rent the rooms for accommodation. The first floor above is the dining room, furnished with a large heavy table. A chandelier graces the room, and many pieces of antique furniture, plus comfortable couches and armchairs in front of the wood-burning stove in the fireplace. The original stone walls are exposed and have been repointed.

A fully outfitted kitchen has been installed in one turret. It is modern and luxurious.

The third turret has a large bathroom, which contains a lovely free-standing bath. At all levels above the ground floor the southeast turret contains a small chamber with an even smaller garderobe chamber opening off it.

The fourth turret on the first level contains a second, wooden, staircase, for fire escape safety. We looked up to see the top of the turret, which has a ceiling of overlapping flagstones, much like the tower ceiling which we saw in the Moone Abbey ten pound tower, and also in Newgrange.

The two upper floors of the turret have been decorated as luxurious bedrooms. There is a corridor off the third floor that leads into the main house, and which has been converted with two more beautiful bedrooms that can be hired for accommodation, plus bathroom.

I would love to stay! There is more accommodation in the yard. 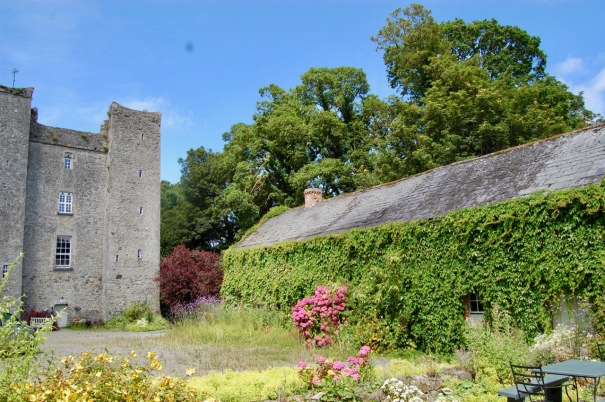 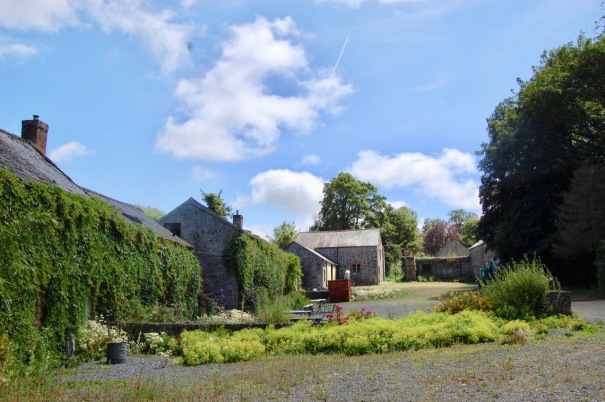 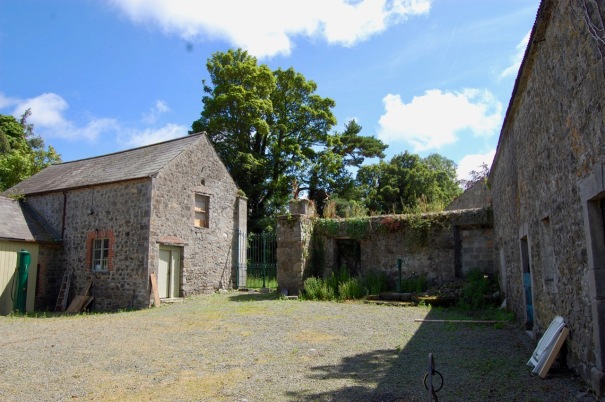 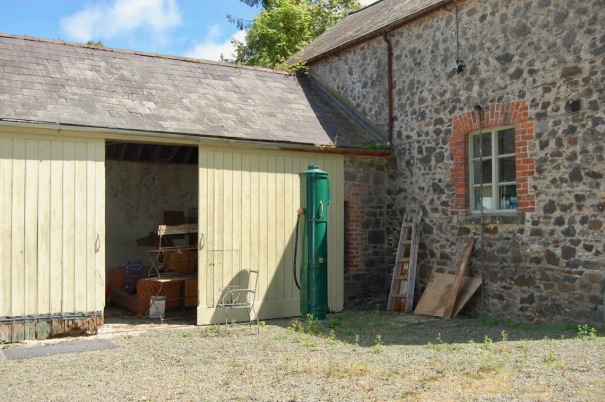 There is a walled garden, which now is the back garden of the Allen family, and contains a tennis court. After our tour, we wandered into the lovely garden. 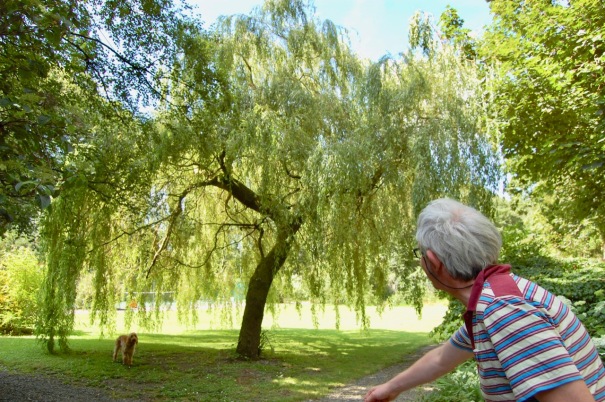 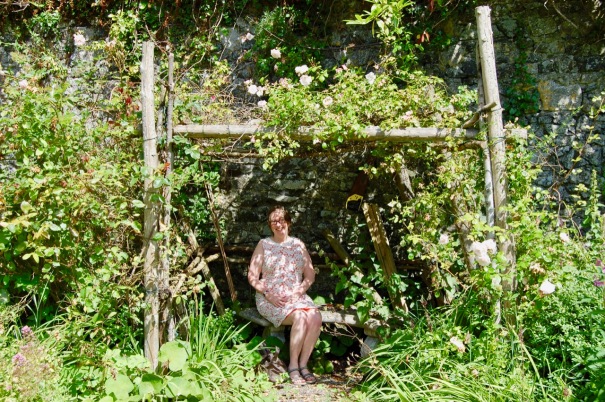 According to the website, fifty years after the castle was built, the Castle and lands were rented for £4 a year by John and Thomas Talbot, who supplied three armed horsemen for the royal army. 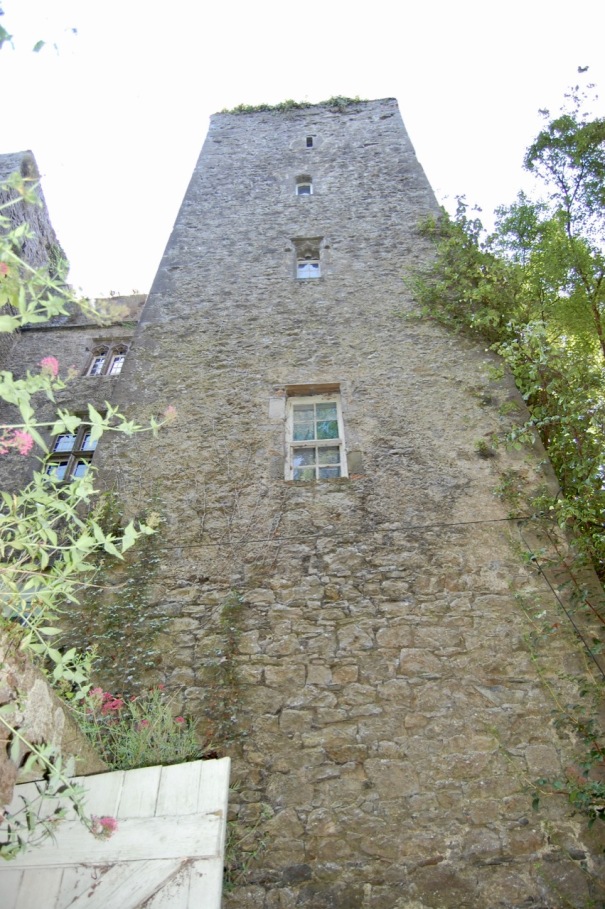 The Talbot family remained in Dardistown Castle until 1690, when they lost possession of the Castle and lands at Dardistown after the Battle of the Boyne. The castle became the residence of the Osborne family, who remained there until 1970. Francis Osborne of Dardistown was M. P. for Navan Borough in 1692 and 1695, and the Osborne family continued to occupy Dardistown until the death of the last member of the family. Henry Osborne (died May 10, 1828) also owned Cooperhill Brickworks. The castle passed via Samuel Henry Osborne to Henry St. George Osborne, who died in 1899, and then to his son Henry Ralph Osborne, who died in the 1970’s.

It was then taken over by the Armstrong family until 1987, and then the Allen family, who are from the Drogheda area, and it was Ken Allen who showed us around. He has restored the castle tower beautifully. 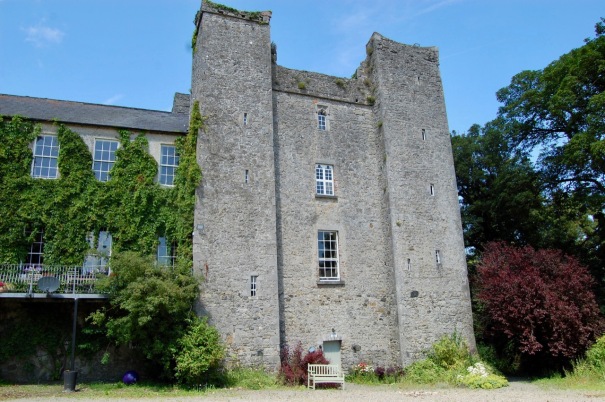 The tower was a ruin when the Allens acquired the castle and attached house.

The first extension to the Castle, forming part of the present house, was built before 1582, when Dame Genet (or Jenet) Sarsfield came to reside here, and made a new entrance doorway and built a further addition (commemorated by two stone tablets on the house). 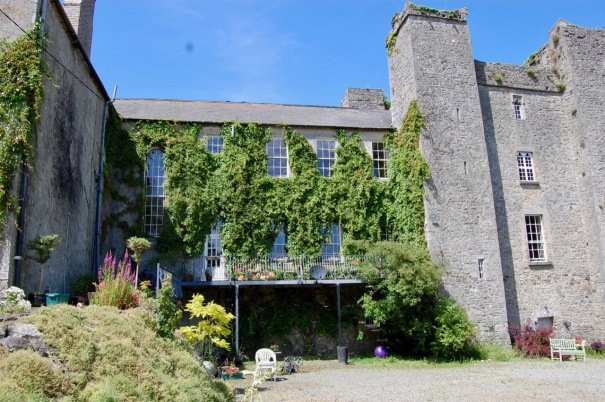 Dame Jenet Sarsfield was the not only the widow of Robert Plunkett. She was also the widow of Sir John Plunket of Dunsoghly Castle in Dublin (that one is not on the Section 482 list so I will not be visiting it this year!). She was married six times! She was the daughter of a merchant, John Sarsfield, of Sarsfieldstown in County Meath. She was born in around 1528. Her brother William was an alderman of Dublin. She must therefore have mixed in rather elite circles, as she married Robert Shilyngford (or Shillingford), who became Lord Mayor of Dublin in 1534 for the usual one year term. They had one daughter who survived to adulthood – the only offspring of Jenet who lived into adulthood, according to Wikipedia [5]  . Jenet was also reputed to be the tallest lady living in Ireland in the 1500s, as testified by the tall door built at Dardistown! (it must be this pale green door under the balcony). [6] 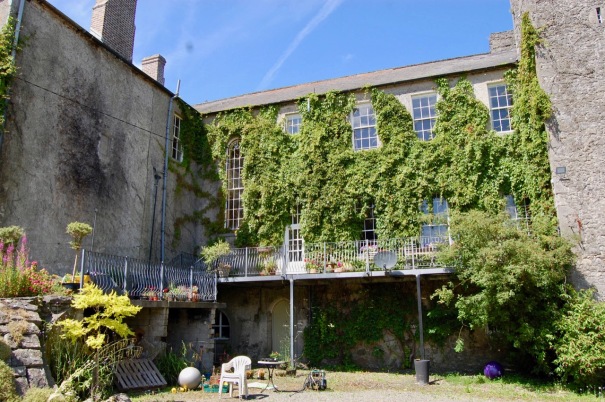 After Robert’s death, Jenet married James Luttrell. He was also prominent in Dublin administration as he was the High Sheriff of County Dublin in 1556. He died in 1557.

It was after James Luttrell’s death that Jenet married Robert Plunkett, 5thBaron of Dunsany. She was his second wife. He died only two years after her previous husband died! After that marriage, she continued to be referred to as the Dowager Lady Dunsany. She next married Sir Thomas Cusack of Cushinstown. He had previously been Lord Chancellor of Ireland. He was about thirty years older than her. She was his third wife (!), although he refused to acknowledge his first wife. His second wife was reputed to have murdered her first husband, but she had a happy marriage to Thomas Cusack. Jenet had around eleven years as Thomas Cusack’s wife before he died.

Jenet inherited most of Cusack’s personal property, which was unusual at that time. Normally the firstborn son would be the heir. Sir Robert had acquired the Abbey of Lismullen after the Dissolution of the Monasteries. Sir Robert’s son Edward pursued litigation to obtain his father’s property. Lady Dunsany married Sir John Plunket then, who was an influential judge and Privy Councillor. She eventually vacated Lismullen but Edward the stepson complained that she had removed most of the valuables. Lady Dunsany lived with her husband Sir John Plunket in Dunsoghly Castle. He died in 1582.

The historic battle of Julianstown of 1641 is said to have taken place on the front lawn of Dardistown, though at that time it was separated from the House by the road [in1800 the road (main Drogheda – Dublin road at that time) was moved so that, instead of passing the front door, it now curved several hundred yards from the Castle, enclosing the area which is now picturesque parkland.] Richard Talbot was then in occupation of the Castle. The battle was fought by insurgents led by Sir Phelim O’Neill, against an English garrison on their way to Drogheda. Three new rooms were added to the Castle about this time.

In the main house, the drawing room and dining room date from around 1750. The upper floors were added in two stages, the back about 1800 and the front in 1860. We did not get to see inside the main house, as the Allen family live there.