I visited this property in 2012 during Heritage Week with my husband Stephen and my Dad. We were welcomed by the owner, Frank Kerins. A glebe house is one on the grounds of a church providing accommodation for the clergy. This house is next to Saint Finian’s, an ancient church from the fifteenth century, but no longer houses its vicar and is in private ownership. St. Finian’s is now a Church of Ireland and still holds weekly services. There’s a beautiful view of the church from the back of the house, where one can see the restored Gothic “pointed-arched window with flowing tracery” [1] through another arch, and behind, the church tower.

The older part of the house dates from around 1720, and is a five bay two storey block over basement [2].

[17/5/20: I have stumbled across a reference while looking up historic houses in Dublin, while googling Athgoe Castle. This reference gives a little detail about the Glebe House, which is referred to as the Rectory for St. Finian’s Church: The Archdeacon of Glendalough, Thomas Smyth, who became Archdeacon in 1722, built the rectory. The east window of the church bears his initials and the date 1724. [3]]

An addition from about 1820 has, according to the National Inventory of Architectural Heritage website, two-bay rere elevation, and single-storey extensions to east. [4]

A second tower stands in front of the Glebe house, and I immediately fell in love with the attached 1727 Mews house. The Mews house contains accommodation and an artist’s studio. The deep yellow door, white painted divided pane sash windows, ivy and flowers won my heart. 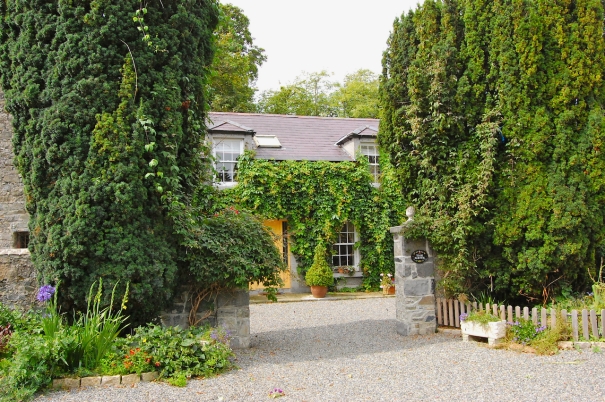 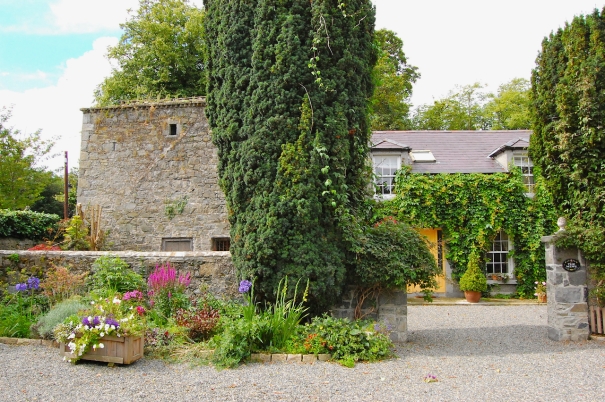 Mr. Kerins is enthusiastic about the house and is familiar with the history, as of that of the tower and adjoining church. He has written a book, published in 2017, called Some views of the Old Glebe House, Newcastle.

There is an article that was in the Irish Times when the house was for sale in 1999, by Orna Mulcahy. She overestimates, I believe, the age of the house. [5]:

“One of the oldest houses in south Dublin, it was built by a vicar of Rathmichael, the Reverend Simon Swayne, in the mid-1600s. The original two-storey over basement house was extended in the 18th and 19th centuries and the current owners have made their own contribution in the form of a small conservatory overlooking the gardens. The property includes an old cut-stone mews house.”

Maurice Craig in his Classic Irish Houses of the Middle Size, p. 66, pictures “Newcastle Rectory, Co. Dublin” and it looks like this Glebe House. He says it is built in 1727 by Archdeacon Smyth. Another article in the Irish Times claims that it was built in 1710. [6]

I was not allowed to take photographs inside the house, which is usual for the section 428 properties. Mr. Kerins gave us a tour. We entered the large front hall, impressively furnished and finished. This open into the long drawing room through a door with fanlight. Another door from the hall leads to a dining room. Through a hall, one steps into a lower level of the house and to the timber conservatory. My father and Mr. Kerins chatted about furniture, as my Dad’s father was an antiques dealer, while I envied the occupants of this beautiful, comfortable, elegant home. There is a beautiful wood-panelled sitting room.

I did, however, take many photographs of the splendid garden at the back of the house, which leads down to a lake.

The second article from the Irish Times continues:

“The Old Glebe used to belong to the Church of Ireland. The church dates back to the 13th century but the present house was built in 1710. The current owner, Frank Kerins, bought it in 1989. In a corner of the garden (open to the public in summer) surrounded by benches, stands a wonderfully wide and healthy yew. Like any tree, its age is up for dispute. With a bulging girth of five metres, Fennell estimates it at 500 years plus. “Some of the branches have been lifted, but it’s probably Dublin’s oldest tree.” Kerins is adamant it is older. “There are local references to it and to Jonathan Swift – it’s definitely over 700 years.”

“Fennell is conservative when estimating age. “Yews are probably older than most people think. Some time in the future they will be able to nail it down with new technology and humble previous opinions.”

“In the meantime, Kerins, like others before him, enjoys his tree. ‘We’ve restored the gardens and the house. The wildlife and shrubs have returned. We love to sit under the tree and take a glass of wine and imagine what Swift must have been thinking when he sat here 300 years ago. He wrote to his friends and he also had a girlfriend in the area, from Celbridge.’ [he must mean “Vanessa,” or Esther Vanhomrigh, who lived in Celbridge Abbey in County Kildare].

Stephen and I sat beneath this “Dean’s Tree”, under which Jonathan Swift, Dean of St. Patrick’s Cathedral, enjoyed writing before his death in 1745. Perhaps he sat here to write a letter to Stephen’s ancestor, the Reverend John Winder, who succeeded Jonathan Swift as Vicar of Kilroot, County Armagh.

I loved the romantic statues placed in the garden.

The picturesque lake completes the beauty of the garden with its deep peace.

After we said goodbye to Mr. Kerins, we went to explore the church nextdoor. The National Inventory describes it [1]:

Appraisal
This church has been a major historical feature of Newcastle since the fifteenth century, once a Parish Church of the Royal Manor and is still in use. The site contains a variety of fine gravestones which further enhance the setting of this engaging building which possesses many attractive features, particularly its windows.”

I found it difficult to take a photograph of the whole church, so here is one from the National Inventory website: 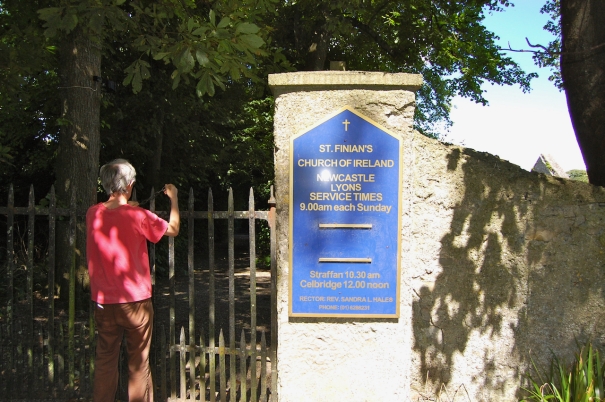 I was particularly interested in the graveyard as it contains some Bagots, whom I hope were my relatives, though I have not found the connection (it must be far back in the family tree, and we stem from a different branch, if connected at all). A website that describes graves lists James John Bagot and his wife Ellen Maria (nee O’Callaghan), who are interred in this cemetery [7]:

There is a large vault, grass-grown at top, with a cross-shaped loophole at east end,inscribed:-
Pray for the souls of | Those members of the BAGOT Family | who are interred herein | the last of whom | JAMES JOHN BAGOT ESQr | of Castle Bagot County Dublin | Died Aged 76 years | on the 9th of June 1860 | Pray also for the soul of |Ellen Maria BAGOT | his widow interred Herein | who died at Rathgar on 17th Sept 1871 | R.I. P.

Stephen and I returned in 2018 to have a closer look at the grave. In 2012, we thought the grave was the rather macabre vault containing half-open coffins: 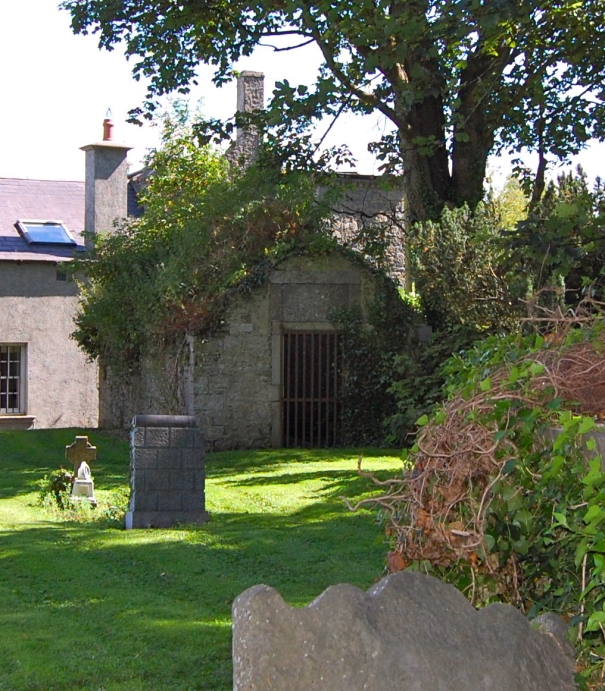 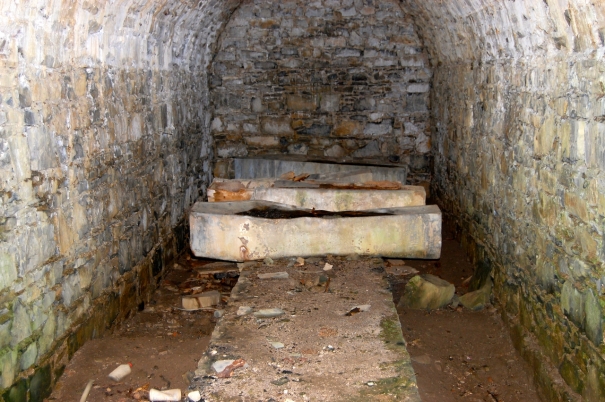 In August 2012, we also visited the Catholic church of St. Finian’s in nearby Kilamactalway, to see the baptismal font donated by Ellen Maria Bagot in memory of her husband James John, who died in 1860 and who had lived in Castle Bagot in Rathcoole/ Kilmactalway. I’m a little confused as to why James John and his wife were buried in the Protestant graveyard, since there is a graveyard at the Catholic church, which was built in 1813.

“Quatrefoil window: a window in the shape of a four leafed clover; found in Gothic and Gothic-Revival architecture.”

One thought on “The Old Glebe, Newcastle-Lyons, County Dublin”