Check opening dates with owner due to the Covid-19 restrictions.

I contacted Mr. Savage Jones beforehand and we went to visit Colganstown on the last day that it as open in 2019! It was a rainy day, unfortunately, but I cannot complain as we have been so lucky with the weather on our visits.

The entrance gates have the visiting times displayed.

In his A Guide to Irish Country Houses, Mark Bence-Jones describes Colganstown as Palladian. [1] It is not immediately apparent, but the house, the centre block, is attached to two “wings,” which appear to be separate but are connected by flanking walls. The walls are unusual as they come from the back rather than from the front of the house, and are just the height of one storey. The house is attributed to the amateur architect Nathaniel Clements, who also built the Aras an Uachtarain (the House of the President [of Ireland], previously the Viceregal Lodge – although Nathaniel Clements built it for himself, as he was the Chief Ranger of Phoenix Park at the time). The Aras has been much added to, however, since the time when it was Clements’s residence.

The centre block is of two storeys over a basement, and the wings are of two storeys with three bays. The Palladian-style sweep is further prolonged, Bence-Jones describes, by gated walls joining the pavilions [wings] to the gable-ends of farm buildings, which run from the back to form the sides of yards on either side of the back of the house.

Colganstown was built in the 1760s for the Yates, or Yeates, family, who also owned Moone Abbey in County Kildare, another section 482 property, which you can also read about on this blog [2]. The centre of the main block breaks forward slightly,and has a Diocletian window above a tripartite fanlighted and pedimented doorway [3]. Bence-Jones writes that the glazing of the fanlight is delightfully original! The Diocletian window, the semi-circular one above the doorway, divided by vertical mullions, is derived from Roman baths, according to Maurice Craig and the Knight of Glin, Desmond Fitzgerald in their Ireland Observed, A Handbook to the Buildings and Antiquities (Mercier Press, Dublin and Cork, 1970) .

The house was in poor condition when Howard and his wife Lynn purchased it in 1992. They moved into the basement of the house while they refurbished. The wings were not habitable. Slates were gone from the rooves of the wings, so the buildings had to be re-roofed. Since the roof had gone, the walls were in extremely bad condition, and so far the current owners have renovated just one of the two wings.

Howard took us through the house to the airy new kitchen, which he had added to the house. The original kitchen would have been in the basement. He added a “bridge” from the bow at the back of the house, a glass-topped walkway which forms a sort of orangerie, across the courtyard from the basement below, to a lovely conservatory style room, with large windows. You can just see the roof of this addition in one of my photographs. The owners chose the materials and style of the addition carefully to complement the house. In the photograph below one can see the way the basements have windows and let in the light. You can also see how at the front and back there is a wall about a metre from the basement, so the earth doesn’t cover the walls of the basement.

Sitting in this comfortable room, I didn’t recognise it to be a kitchen until Howard mentioned it, because everything is hidden in cupboards and panelling. There are comfortable seats beyond the island, where we sat to discuss the history of the house.

I had printed out my notes about the house, for Stephen to read aloud in the car while I drove, and I showed my notes to Howard so he could see the information that I’d gathered so far.

The basement of the house is at water level, and when they moved in, water had to be pumped out of the basement. Originally there had been drains coming out from the basement but the conduits had collapsed, so the current owners installed electric pumps. There’s a wonderful tunnel from the basement level near the back of the house, which goes to one of the wings from the basement kitchen, and would have been for the servants. I didn’t get a great picture of it, but you can see it from the “bridge” orangerie in this photograph (excuse the reflections on the glass window): 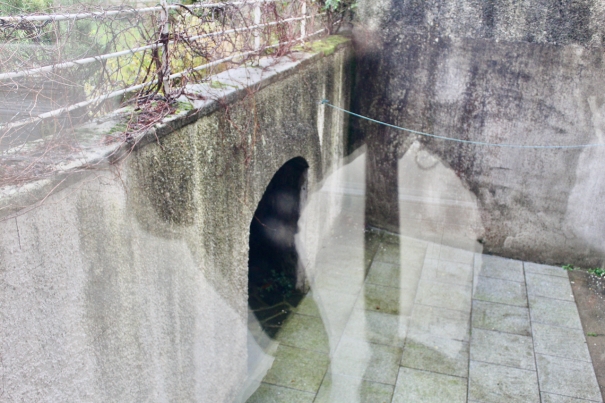 In Classic Irish Houses of the Middle Size, Maurice Craig notes that not a lot is known about the date of building, or original ownership, of Colganstown. He writes that: “It appears to have been built by a family variously spelt as Yates or Yeats, who had a house in Sackville Street (now O’Connell St) in the 1760s and also Moone House in Co. Kildare.” It was great to be able to tell Howard that we had visited Moone Abbey House earlier this year.

Howard told us that Yates had business interests in Dominic Street in Dublin, and this could explain how the Yates came to have a beautiful ceiling by Robert West in their drawing room in Colganstown, as West would have been a neighbour in Dominic Street. According to the Dictionary of Irish Architects, Robert West was admitted as a member of the Plasterers’ Guild in 1752, and died in 1790. He is associated with one of the most spectacular pieces of stuccowork in Ireland, the hall of the house which he built as a speculation at No. 20 Lower Dominick Street. [5]

The stuccowork of birds in the drawing room is famed as a story is told about a raucous party where dinner guest shot at the birds. Bence-Jones writes: “The interior contains some excellent rococo plasterwork in the manner of Robert West; there is a Chinese dragon over the staircase window and many birds in high relief, some of which have unfortunately had their heads shot off at one time or another as after-dinner sport.” Howard showed us the mark in the ceiling but pointed out that the story is probably a fable – there is not much damage to the birds but the corner does get damp, and the dampness might have caused the damage!

In Classic Irish Houses of the Middle Size, Maurice Craig writes about who might have been the architect of the house:

The Knight of Glin has made a good case for regarding it as part of the oeuvre of Nathaniel Clements, a politician and banker turned architect, who was born in 1705. He was a political associate of the great Luke Gardiner of Henrietta Street, who speaks of him as an “architect” as early at 1744. One thing is certain: that Colganstown belongs with Clements’s own house Woodville, with his other house (later transformed as the Viceregal Lodge), with Williamstown, Co. Kildare, with Newberry Hall, with Belview, and probably also with Lodge Park, Straffan. It is impossible yet to say where it belongs in the series, but the character of its internal decoration, admirable stucco decoration in the style of Robert West, suggests a date in the 1760’s. [6]

Craig calls Colganstown a “hobby” farm, as it is small and near the city in Dublin. A gentleman, however, he points out, can look out his windows without seeing the farmyards, since the farm building are built to the sides. The acreage has been reduced, however, to just 25, and the surrounds are farmed by a neighbour, which means the beauty of the driveway through the fields has been retained (although the driveway had to be reworked and a separate drive made for the farmer and his heavy equipment, which had taken its toll on the original driveway). The original farm reached all the way to the canal. A previous owner of the house, Andrews, was involved with the canals.

The area has long been inhabited, as one can see from the building behind the house – see the photograph below.

This house, now a ruin, was owned by Thomas Arthur, a politician from the “Patriot Parliament,” who was killed in the Battle of the Boyne. The Patriot Parliament was one in Ireland called by James II during the 1689-1691 war in Ireland, and held only one session, from 7 May 1689 to 20 July 1689. Arthur, therefore, would have been loyal to James II, and therefore fought against William III, who had been invited to be king of England (and Scotland and Ireland).

Colganstown was also previously occupied in the early to mid 1900’s by the Blackrock Christian Brothers, Howard told us, and by a Scottish family named Harrison.

He then took us on a tour of the house. I was eager to see the stuccowork, especially the dragon mentioned by Bence-Jones! I didn’t take photographs of the drawing room birds, but took out the camera to photograph the rococo work in the stairwell.

The library has wood panelling and shelves taken in the 1960s from a building in Mountjoy Square. There is more stuccowork on the ceiling, a frieze with birds, and even a nest with chicks.

You can see how the stairs are built into the bow at the back of the house.

In 2010 a pipe burst, which was very destructive but fortunately the stuccowork was unharmed. The owners had to get new flooring – they managed to salvage parts and to buy salvaged wood from other houses. In rebuilding, Howard told us, he discovered that the walls are packed, in between the lathe and plaster, with dry moss and bracken, acting as insulation!

Craig writes of the interior of the house:

The small square hall is groin-vaulted with delicate plaster enrichment: the doors are of beautiful pale mahogany. The staircase-hall ceiling has, in its wandering Rococo design, elongated versions of the cornucopia so frequently seen in Dublin bookbindings of the 1760s… Elsewhere the birds of the West school are ubiquitous in high relief, with baskets of fruit and flowers.

The bow continues upstairs with lovely curved walls and the bedrooms are a nice size. The main block forms a perfectly sized house on its own. The front room upstairs was once a chapel when the Brothers lived in the house, and that room is unusual with the Diocletian window. It is a lovely comfortable house, and with its proximity to Dublin, I envy its owners! They have made a lovely home.