On Saturday 4th May last year (2019), after visiting Salterbridge, we crossed the Blackwater over an impressive bridge, to visit Tourin House, the house of the other Musgrave brother. As I mentioned in my entry for Salterbridge, Richard Musgrave of Wortley, Yorkshire, settled in Ireland. He had two sons. The elder, Richard, acquired land from the Earl of Cork and built Salterbridge House in about 1750. The younger, Christopher, settled in Tourin. The website states that Richard Musgrave purchased Tourin in 1780 – he was Christopher’s son.

The house we visited is not the house which Christopher lived in. That house still exists, and is known as Tourin Castle and it is part of the estate. This is a tower house that dates from 1450, according to the National Inventory of Architectural History. [2] Before the Musgraves, the land was owned by the Roches, and then the Nettles. The Roches lived in the towerbuilding (the Landed Estates database mentions a “Sir John Roch of Tourin”). They added a later house built at right angles on to the fortress in the 1600’s, where people who worked on the estate later lived, and today it is still occupied by people who work on the estate! The tower itself is unoccupied, and uninhabitable, I believe. John Nettles, originally from Hereford, settled in county Waterford in the mid 17th century. He was granted land in counties Cork and Waterford by patent dated 1666. The Nettles lived at Tourin and Mahallagh, county Waterford and at Beare Forest and Nettleville, county Cork. [3] John Nettles was High Sheriff of County Waterford in 1670. His heir, also named John Nettles, became a Major in the army and was also High Sheriff of County Waterford (1690-1). His son and heir, John Nettles of Tourin, Mahallagh (or Mahillagh) and Beare Forest, Co Cork, passed the properties to his son, John Ryves Nettles, who sold Tourin and Beare Foreste in around 1780. [4]

Tourin Castle is part of the farmyard complex, which we visited after the house.

History of the Musgraves

According to the website of Timothy Ferres [5], Christopher Musgrave, the younger son of Richard Musgrave originally of Yorkshire who moved to Ireland, settled at Tourin and married Susannah, daughter of James Usher, of Ballintaylor. He was succeeded at his decease by his eldest son, Richard Musgrave (1746-1818), who was created a Baronet in 1782. He was Collector of Excise in the port of Dublin, MP for Lismore and sheriff of County Waterford, in 1778. As a political writer, he collected large amounts of information and evidence relating to the 1798 uprising, and published his findings in 1801 as Memoirs of the different rebellions in Ireland from the arrival of the English, with particular detail of that which broke out the 23rd of May, 1798; the history of the conspiracy which preceded it, and the characters of the principal actors in it. Although the work was detailed, Musgrave’s conclusions were sectarian and polemical. [6] He was fiercely anti-Catholic.

He married Deborah, daughter of Sir Henry Cavendish (who was also an MP in the Irish parliament for Lismore), but had no children, so the title devolved to his brother, Christopher Frederick Musgrave (1738-1826), 2nd Baronet, who married, in 1781, Jane, daughter of John Beere, of Ballyboy, County Tipperary. His son by Jane, Richard (1790-1859) was the heir.

The heir, Richard, 3rd Baronet, married Frances, daughter of the Most Rev. William Newcome Lord Archbishop of Armagh. It was Richard the 3rd Baronet who built the new house, Tourin House, in 1840. He also served as a Member of Parliament for County Waterford. His son Richard 4th Baronet, then his son Richard 5th Baronet, inherited. The 5th Baronet had no sons, so his elder daughter, Joan Moira Maud Jameson (née Musgrave) inherited the Tourin estate and her descendants live at Tourin today.

Tourin House is an Italianate style villa with classical proportions, Tourin House was finished in 1841. Tourin is a lived in House where one of the family welcomes groups and will give tours of the House and Garden.

The Musgraves moved from Tourin Castle to their new house built on higher ground. Mark Bence-Jones describes the new house as a square two storey house with an eaved roof on an unusually deep and elaborately moulded bracket cornice, which is echoed by a wide string-course. The entrance front, as you can see in my photograph, has three bays between two end bays, each of which has a one storey projection with a door and pilasters. The four bay garden front has triple windows in both storeys of outer bays, and a single-storey curved bow in the centre (see my photograph below). [7]

when the Musgraves gave up living in the old tower house and its additions at Tourin, County Waterford, they moved into a new residence on higher ground. Dating from the early 1840s the house’s rendered exterior, its design sometimes attributed to local architect Abraham Denny, is relieved by wonderfully crisp limestone used for window and door cases, quoins, pilasters, cornice and stringcourse. [8]

The eldest daughter (Joan Maura Maud) of the fifth Baronet Musgrave inherited Tourin and married Thomas Ormsby Jameson (of the Jameson whiskey family) in 1920. Their son Shane Jameson inherited, and married Didi Wiborg, a Norwegian. Their three daughters then inherited, and now own, the estate.

We were privileged to meet two of the sisters: Kirsten and Tara. The third, Andrea, an artist, was giving an art class. We were greeted at the door, after we rang the bell, by Rose. She used to live in the gatehouse, and works in the gardens. She gave us an introduction to the house and took our photo in the front hall, and showed us photos of the house as it was before some additions, done, I think, by the current residents’ mother, Didi, who also chose the paint colours for the walls, which are maintained, and planted many of the trees in the garden.

In the sitting room  we came across one of the sisters, Tara. She was vacuuming. They were in the process of trying to fix one of the curtains, as a fixture had come loose from the wall. To rehang the curtain, the entire pelmet must be taken down – it gives one an idea of how much effort is required to maintain a heritage house. We had a lovely chat about the area. We explained that it’s our first time in the area, and she gave us several recommendations, including Foley’s on the Mall in Lismore, where we consequently decided to go for dinner!

I was disappointed not to be shown the upstairs of Tourin House. The owners were so kind, however. We met Kirsten in the hall and she told us of an art exhibition they’d had in the house, where several artists, including her sister Andrea, had two years to produce a piece in the garden, which were then exhibited in the house. The next exhibition of the group will be in Birr Castle.

We then headed out to the gardens, and to the enormous walled garden. The gardens were laid out at the beginning of the 20th century by Richard Musgrave, with the help of his friend, the Cork brewer Richard Beamish [5]. We were accompanied by an affectionate Red Setter. We learned later that one of the sisters breeds and shows Irish setters, and we met more in their kennels. They are lovely natured dogs.

“A long formal Broad Walk leads from the House to the pleasure grounds and beyond there to the walled garden, which belonged originally to the tower house. Successive generations of the Musgrave and Jameson family (Joan Jameson married Tommy Ormsby Jameson in 1920) have left their mark on the garden. The present owners’ mother, Norwegian born Didi Jameson, was a keen plants woman and the fine collection of trees and shrubs that she planted has now reached maturity.

The Broad Walk leads to the more informal path of the pleasure garden past a colourful array of plants, shrubs and a rock garden to the walled garden, which has supplied the family with fruit and vegetables for generations. Today the Walled Garden is a mix of ornamental and productive planting and is at its best and most colourful in midsummer.

The gardens at Tourin cover over 15 acres including the main garden, walled garden, and extended broad-leaved woodland walks, which lead to the banks of the Blackwater river and Tourin Quay.”

Near the entrance to the walled garden are some farm buildings, one of which holds Andrea’s art studio. 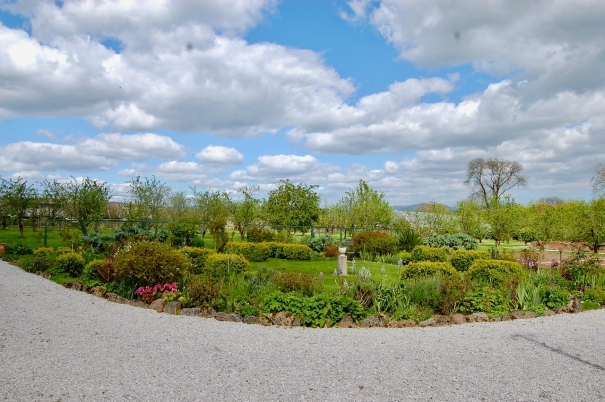 At the end of the walled garden we went through a gate and wandered into a breathtaking copse of bluebells. 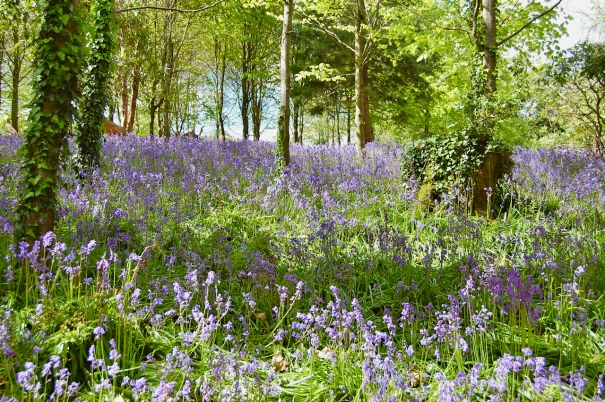 After the copse of bluebells, we ran into Kirsten out gardening. The sisters maintain the garden, which is often open to the public. She recommended that we walk to the river. We headed back out but her directions were not exact, and we took three wrong paths before heading back onto one we had already traversed! We met a woman walking her dog and she confirmed that we were on the correct path. She was the mother of the man who now lives in the old house next to the tower. 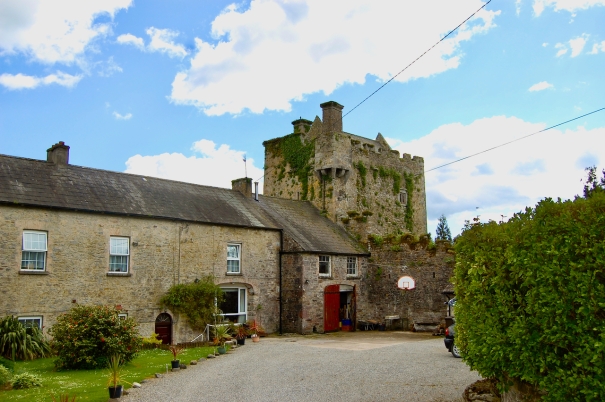 We had been only metres from the river already but had trekked left rather than going over a small hillock to the river! Corrected, we found the Quay of the Blackwater, and indeed it was worth it! 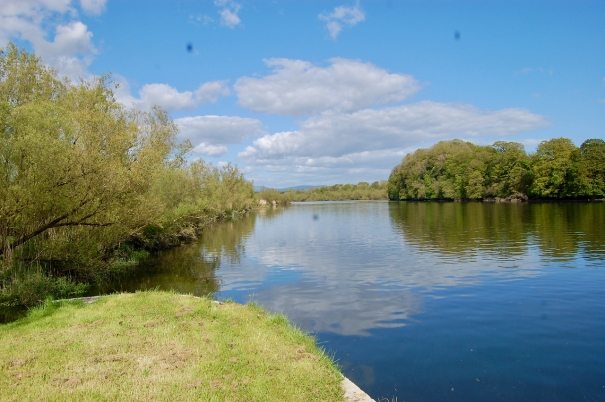 [4] Burke, John. A Genealogical and Heraldic Dictionary of the Landed Gentry of Great Britain and Ireland.

The Irish Aesthete’s “to new” title makes sense when we see his previous entry, “From Old,” which discusses the tower: https://theirishaesthete.com/2016/06/15/tourin/